When studying glaciers, there is so much to consider, not just what a glacier is, how they are formed, what their processes are and the landscapes they sculpt, but what effects do they have on people? ...Glaciated landscapes can have positive and negative impacts on human activity.
For example, the highlands can be used for sheep farming; however other farming activities are unfeasible. The steep mountainous landscape means the land cannot be ploughed, plus the cold, wet windy weather means that arable farming is impossible. The slopes will only support relatively poor vegetation making it only possible to rear sheep on the land. However this can have a damaging effect on the environment as trees and other vegetation need clearing first.
Lower down in the valley, the floors are made up of heavy clay soils which are more suitable for rearing dairy cattle and crops such as turnips and potatoes, helping create jobs boosting the local economy. It can be argued that farmers use of fertilizers, pesticides and weed killers are damaging the natural environment. Also intensive farming in these areas can displace vegetation and wildlife.
The highlands are great to support tree growth and therefore many conifers are planted. This forestry provides jobs for many and supplies locals with timbre. By planting the conifers, this reduces soil erosion in the area and prevents deforestation taking place elsewhere.  However forestry can push out other types of vegetation and can prevent other activities such as farming which can potentially go into decline. The plating of trees can not only provide a habitat for flora and fauna it can also destroy other habitats.
Glaciated highlands are also popular for tourism due to the picturesque scenery with their beautiful lakes and mountains, an example being the Lake District (a National Park). Tourists tend to walk, climb, bike, ski and camp in these areas which are also very popular for educational trips. High levels of tourism in an area can bring wealth to the community and provide many with jobs. However due to the high influxes of tourists to these areas, and the facilities being built to accommodate such high demands the Government has stepped in to preserve many of these National Parks.
Glaciated highlands are also used for Hydro Electric Power (HEP). These areas are among the wettest in the country and their deep valleys are ideal for building dams to support HEP. However at the same time, the building of HEP and creation of reservoirs can have a dramatic impact on the environment causing the flora and fauna in the surrounding areas to also suffer. Not only this but HEP can be considered as an eye sore.
CONFLICTS
The many positive attributes are also accompanied by many conflicts.
Water companies fight farmers over flooding valley floor farmland, conservationists over ruining the natural countryside, and tourists wanting to use the water for leisure activities.
Farmers fight road builders who use up valuable land for roads and car parks, and tourists who drop litter, leave farm gates open ad damage dry stone walls by climbing over them.
Conservationists fight tourist over spoiling the scenery with overcrowding – damaging natural features by footpath erosion, tourist accommodation etc.
The National Park Authorities have to balance out the various uses and demands without destroying the nature of the resource that is a major attraction in the first place.
Students should consider and weigh up all the positive and negative impacts glaciers can have on human activity. I feel these will be displayed best in a table.
Links:
http://www.bbc.co.uk/schools/gcsebitesize/geography/glacial_landscapes/human_activity_glaciated_areas_rev2.shtml
http://www.bbc.co.uk/scotland/learning/bitesize/standard/geography/glaciation/glac_land_use_rev1.shtml
Posted by Unknown at 07:27 No comments:

As mentioned in the previous post, glacial erosion can have a huge influence on the shape of landscapes. This is because they erode at such a fast pace, surprisingly much faster than a river (despite moving much slower) providing they have a continuous supply of material. The main source for this material is from freeze-thaw weathering. Freeze-thaw occurs in rocks that have many cracks and joints in them and where temperatures are around freezing point. The water that gets into these cracks freezes at night and expands putting pressure on the surrounding rocks. The melting of the ice releases the pressure however continuation of this process widens the cracks more and eventually causes jagged pieces of rock to break off. The glacier uses this material, called moraine to widen and deepen its valley.
There are two main types of glacial erosion: abrasion and plucking.

Abrasion: is when the material carried by a glacier rubs against the sides and floors of a valley like sandpaper. It is similar to corrasion by a river but on a much larger scale.
Plucking: occurs when meltwater from a glacier freezes onto solid rock. As the glacier moves forward it extracts pieces from the rock surface.
LANDFORMS
Right so I now know what a glacier is and how one forms, the next step is to look at the landforms they create/leave behind. When glaciers move, they tend to follow the easiest possible route which is usually a river valley. Unlike a river, glaciers can fill the whole valley and therefore have much greater erosive power. There are numerous types of landforms that are created by glacial erosion which I have listed below.
A good source that can be referred to is: http://www.geography.learnontheinternet.co.uk/topics/glaciation2.html. 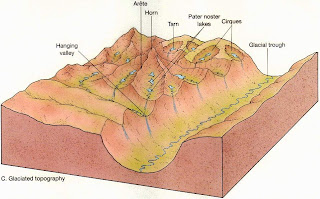 Glacial trough - These are made by the movement of a glacier downhill eroding into the floors and walls of, usually, old river valleys. The glacier carves through the rock deepening and widening the valley by abrasion and plucking. When the ice melts a glacial trough is left behind, also known as a U-shaped valley.
Corries – A deep semi-circular hollow found near the top of a mountain, formed by plucking and abrasion processes of moving ice downhill. Corries are also known as cirques, they are all names for the same formation. Corries can be found at Helvellyn in the Lake District.
Aretes – This is a knife edge ridge separating two corries. These can be found in the Lake District.
Pyramidal peaks – These are formed when three or more corries form in the side of a mountain, cutting inwards to learn a ‘horn’ or pyramidal peak in the middle. Pyramidal peaks can be found in Mount Snowdon.
Truncated spurs – These are formed by the glacier eroding and cutting off the river valleys interlocking spurs leaving truncated spurs. Truncated is really just another word for ‘cut-off’. Truncated spurs can also be found in the Lake District.
Hanging valleys – This are old tributaries that are left hanging high up on the valley sides.
DEPOSITIONAL FEATURES
Moraine – A mass or rocks and sediment carried and deposited by a glacier.
Scree – The accumulation of broken rock.
Ribbon lakes – These sometimes form when the terminal moraine that is deposited by ice melting traps water behind it in the glacial trough. This water forms what is known as a ribbon lake. These can also be found in the Lake District.
Till – The material deposited by a glacier which includes clay, sand, gravel and boulders.
Drumlins – These are the smooth egg shape hills left behind when a glacier has not had enough energy for erosion and transportation of material to take place.
Eskers – The material that was being carried in a stream under a glacier that gets left as a long ‘wiggly’ ridge called an esker.
Kames – Little heaps of material deposited on the ground when a glacier melts. This material would have been trapped in the crevasses of a glacier before it began to melt.

This is a useful video: http://www.bbc.co.uk/schools/gcsebitesize/geography/glacial_landscapes/glaciation_video.shtml, taken from BBC Bitesize, which illustrates the glacial erosion processes. When teaching this, it is important that students have a description of the above landforms/depositional features, a range of definitions can be found online.
Posted by Unknown at 05:58 No comments:

What is a glacier?
So what exactly is a glacier? Seeing as I have never studied glaciers, the first thing that springs to my mind is vast amounts of ice in high up mountainous areas, or huge iced areas in the Arctic and Antarctic.
As a student when studying for mt GCSEs, I found BBC bitesize was always a great place to start when looking for definitions, explanations, diagrams and videos. An easy way to learn, using step by step processes. Using BBC bitesize, an old text book and other various websites (listed at the end of the post) I have found out the following: 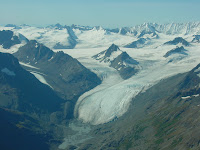 A glacier is made up of compact ice that forms over a long period of time in high up mountainous areas. The size of glaciers can vary from the size of a field to expanding for hundreds of kilometres long. Some glaciers can be thought as remnants from the last Ice Age, this was when ice covered nearly 32 percent of the land, and 30 percent of the oceans. Today however, glaciers take up about 10 percent of the total land area.
Glaciers are seen as unique due to their ability to move and are often referred to as being ‘like rivers’ due to holding similar qualities such as:
-          - Starting in highland areas
-          - Having the ability to flow
-          - Having distinctive cross profiles and long profiles
-          - Having processes in which they erode highland areas but deposit in low land areas.

Up until 10,000 years ago, glaciers covered nearly the whole of the UK as a result of the last ice age (see image). Today, glacial erosion has played a significant part in the way in which our landscapes have formed.
So how are glaciers formed and what are their processes?
The best way to explain how a glacier is formed is by the glacier system (also known as a glacial budget and is shown in the diagrams). This system is made up of inputs, storage, flows and outputs.

Glaciers form when snow remains in one location long enough to transform into ice. Inputs come from precipitation (snow) and avalanches from the glacier sides. The majority of the snow falls in highland areas; this is known as the zone of accumulation where snow is stored. As snow continues to fall, layers build up with the underlying layers being compressed. This compression squeezes the air out of the snow resulting in ice formation. Over time this mass begins to slowly move downhill under the force of gravity. It is estimated that glaciers move between 7 and 10km per year.  This movement (flow) causes the land to undergo erosion such as abrasion and plucking. In the lowlands, the glacier begins to slowly melt, known and ablation, and evaporation will take place to a certain extent. These are the glaciers outputs.
These processes can be very complex with a source stating:
'Usually inputs (accumulation) are likely to exceed outputs (ablation) near to the head of a glacier and in winter. Ablation will exceed accumulation in summer and in lower altitudes where temperatures are higher. If, over a period of time, the annual rate of accumulation exceeds ablation, then the glacier will advance. If ablation exceeds accumulation, the glacier will retreat'.
At present the majority of the world’s remaining glaciers are retreating.
Students can benefit from the links mentioned below and particularly BBC bitesize when trying to grasp what a glacier is and what their processes are. I feel group or class discussions can enhance a students understanding whilst reflecting on the key words (in italics) and their definitions. I think students would benefit by sketching and labelling the glacial system shown in the diagrams above, I have shown a basic and more advanced diagram, one for higher and one for lower years of study.